The Forklift – A Productive History of Innovation 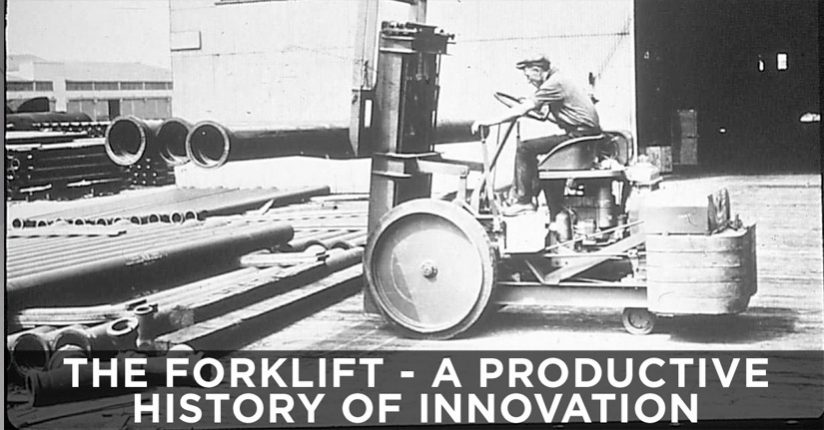 Unbeknownst to many, the powered lift truck has a history dating back over 100 years to the early 1900’s and the railway industry.  Despite differences in technology, the impetus behind this development still drives innovation today as manufacturers continuously develop faster, safer and more efficient means of handling materials.  While changes have occurred on the margins over the last 80 years or so, the defining characteristics of the modern forklift were originally developed during the first 30 years of the 20th century, with few fundamental changes occurring after the 1930’s.  To better illustrate this point, let’s consider a brief timeline in the history of the forklift:

1906 – The Development of the First Powered Platform Truck

It was in 1906 that the modern materials handling industry truly began to take shape.  Fittingly, the roots of the industry began in supply chain logistics with an adapted platform truck at a rail yard in Pennsylvania.  In order to efficiently handle baggage and loads, a railroad official decided to add a battery to a 4-wheel baggage cart, thus creating the first powered platform truck (which, as forklift123’s blog points out, makes the forklift older than sliced bread!).  What followed was the birth of an industry as rapid innovation lead to more complicated and efficient machines.

Less than 10 years later, increased demand for efficiency during WWI resulted in the combination of the horizontal capabilities of the powered baggage cart with the vertical lifting power of the portable elevator.  When a power source was added two years later in 1915, the modern lift truck was born.  Similar in operation to a modern pallet truck, these lift trucks used an extended platform, which could be driven beneath a load, to lift and transport loads.

1919 – The Introduction of the Cantilever and Forks

Shortly after the end of WWI, the modern forklift truly began taking shape with the introduction of the cantilevered forklift and front mounted forks.  With the addition of the cantilever, forklifts were capable of approaching a load directly from the front without requiring additional clearance for protruding front wheels.  Meanwhile, the introduction of forks and rams expanded the types of loads that could be handled.

From 1920 through 1929, the fundamental form of the modern forklift was more or less completed.  Here, the final form forklift truly took shape with the shortening of the wheelbase through the rearrangement of the counterweight and operator’s cabin to the center of the forklift.  This innovation improved the stability of the forklift by moving the heaviest component of the forklift to the rear of the vehicle and at a maximum distance from the fulcrum and paved the way for the introduction of the independently tilting mast.

By the end of the 1920’s, the basic form of the modern forklift was set.  After this point, few changes occurred to this basic form.  Instead, changes occurred at the margins to expand the versatility of the forklift.  At Stärke, we’re proud to take up the mantle of innovation, always introducing products with an eye towards efficiency.  And, with a full line of material handling products from Class II through Class VI, we take advantage of the full history of the forklift, truly a history of productive innovation.

What’s next for the forklift?  Where do you think the industry is headed?  Leave a comment below and join the conversation!

Category: History,
Tags: forklift history, the history of the forklift
Share this