How Forklifts Work – Fulcrum and Counterbalances 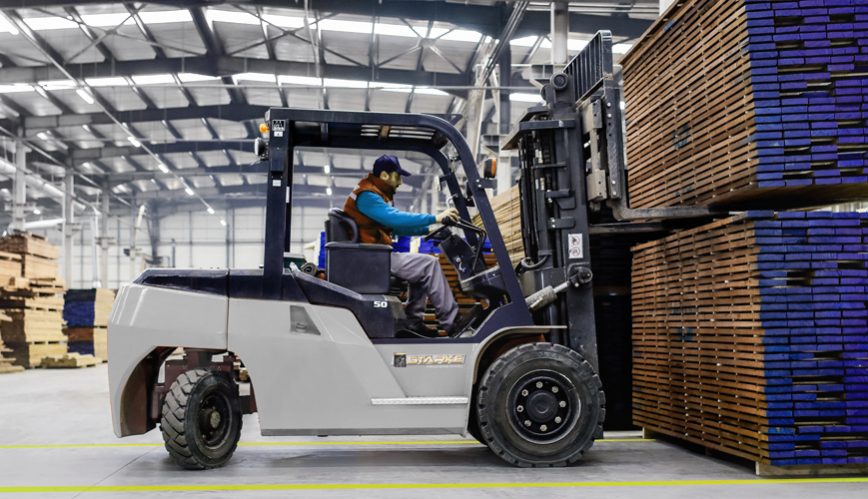 If you’re not in the forklift or material handling industry, or are unfamiliar with heavy duty forklifts in general, you might wonder if the laws of physics are being violated while watching a state-of-the-art forklift in action, especially one with a quad mast and/or a bulky, extremely heavy load. As the unit lifts a load the size and weight of an elephant into the air, you might find yourself wondering: what keeps the forklift from tipping forward into an abrupt and impromptu meeting with the ground? This feeling is particularly apparent if the forklift is elevating a heavy load (which is almost always the case as forklift weight capacities are typically measured in 1,000 lb. increments) and/or extending it 24’ or more into the air while keeping all 4 wheels firmly on the ground.

At the end of all this wonderment, you’ll probably ask a simple question with a deceptively simple answer: just how does it work? These same sorts of questions might also pop into your head as that same forklift rounds a tight corner with that elephant-sized load then travels up or down a ramp while maintaining its stability. Just how does this work?

Despite what your 5-year-old self might proclaim, it is not done with magic. Nor are the basic principles behind the operation of a counterbalanced forklift based on some ground-breaking technology or innovative AI. Most traditional forklifts and lift trucks – even the most innovative high-tech models, like those that are capable of moving in 4 directions with an articulating mast or boom – rely on set of simple physical laws to stay upright while lifting a heavy load or while travelling along a curve. In fact, these laws and principles are ancient, literally, they were discovered thousands of years ago in ancient Greece.

The Basic Principles of the Counterbalance

There’s a reason why what you likely picture in your head when you think of a lift truck is known as a counterbalanced forklift. In an ordinary vehicle, or one that doesn’t have a mast or lift components, the center of gravity typically lies dead center at the bottom of the chassis. This low center of gravity and even weight distribution helps the vehicle maintain balance under normal operations. Since a forklift is designed to lift and transport heavy loads using front-mounted mast, however, its center of gravity must be positioned towards the back end of the unit to accommodate these changes in operating weight. While a bit on the nose for some, this is why these units are referred to as counterbalanced forklifts as the heavy weight at the rear of the unit is intended to offset or counterbalance the weight that can be added to the front of the unit whenever it is loaded.

How this works, at least in terms of what we can cover in a 1,500 word blog post, is a relatively simple concept: the lever. As mentioned above, the underlying principles behind the counterbalanced forklift were first discovered by the ancient Greeks, who first detailed the physics behind the function levers in the 3rd century BCE. Basically, a forklift is able to lift loads without tipping forward by operating as a lever, where the force applied to either side of the pivot point is a function of their relative distance from the fulcrum (i.e., the front load wheels). Since the weight of the load is positioned closer to the fulcrum, more force is required to move it than the rear counterweight. This difference allows the rear counterweight to offset the added weight of a load (i.e., counterbalance it) and ensure the unit’s stability. As you move the counterweight further from the fulcrum, the ratio between how heavy the counterweight is and the unit’s maximum capacity decreases. For example, if you moved the counterweight far enough away from the fulcrum, you could theoretically double the maximum capacity of a forklift without increasing the size of the counterweight provided the engine and hydraulics can provide enough power to lift the new rated capacity.

If It’s Not Magic – There Are Limits

It should be noted, however, that this counterbalanced system isn’t foolproof. To understand why, you need to know how rated or maximum lift capacities are calculated for lift trucks. For a counterbalanced forklift, regardless of the brand or manufacturer, the maximum lift capacity is defined by what’s known as the 80:20 rule – where a maximum of 80% of the combined weight of a forklift and its load (at a 24” load center) can be carried on the front axle. When this ratio is exceeded, the unit’s center of gravity moves outside of acceptable tolerances (shifting outside of an area known as the stability triangle), placing the unit in danger of tipping or rolling over. What’s more, while increasing the distance between the counterweight and the fulcrum increases longitudinal (front to back) stability, it has an inverse and opposite effect on the lateral stability of the forklift as the wheelbase decreases in proportion to the length of the unit.

Another factor that influences a unit’s stability and rated capacity is the distance between a load’s center of gravity and the front load wheels. Perhaps the most important term here is what’s known as the load center, defined as the distance between the front load-carrying face of the forks and the center of gravity of the load. Most forklifts can only lift their full rated capacity if the distance between the load and the fulcrum is within an ideal range at a pre-defined load centre. According to the industry standards established by ASME/ANSI, the maximum rated capacity of a forklift is based on a 24” load center and the assumption that the unit is lifting a load that is a 48” x 48” x 48” cube with a perfectly even weight distribution.

Any time the load’s center of gravity is moved away from the fulcrum point, the unit’s maximum lift capacity decreases – a process known as down-rating. Obviously, this is a bit of an issue as, outside of the test weights used by engineers and manufacturers, 48” cubes with an even weight distribution a load are rarely encountered by your average forklift operator. Instead, most loads are oblong and/or asymmetrical in terms of their weight distribution or geometry. Moreover, this distance-related down-rating effect can also be seen at lift heights above 160’, when the mast is tilted in either direction, or if an attachment is added.

Therein lies the problem – the way rated capacities are calculated and represented does not reflect real life conditions. While generally referred to as a 5,000 lb. forklift, whether by users or in marketing literature, the actual capacity of most of these models is not 5,000 lbs. In fact, the most common forklift configuration – commonly referred to as a rental spec unit – come in well below the base model’s maximum capacity as these units have a triple mast (with lift heights exceeding 160”) with full free-lift and a side-shift attachment, all of which down-rate the unit.

As you can see, a number of issues go into determining the stability and lift capacity of a forklift. The weight distribution of the forklift and its load, as well as the position of the load’s center of gravity relative to the fulcrum all play an important role. Unfortunately, this means that the maximum lift capacity of a forklift and its model number are generally not the same thing. For end-consumers, this introduces a lot of confusion and complicates the purchase process. To make sure you get the unit you need, contact your local Stärke’s dealer.